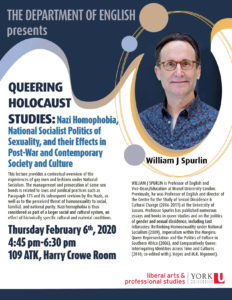 **Queering Holocaust Studies: Nazi Homophobia, National Socialist Politics of Sexuality, and their Effects in Post-War and Contemporary Society and Culture**

This lecture provides a contextual overview of the experiences of gay men and lesbians under National Socialism. The management and prosecution of same-sex bonds is related to laws and juridical practices such as Paragraph 175 and its subsequent revision by the Nazis, as well as to the perceived threat of homosexuality to racial, familial, and national purity. Nazi homophobia is thus considered as part of a larger social and cultural system, an effect of historically specific cultural and material conditions.

William J Spurlin is Professor of English and Vice-Dean/Education at Brunel University London.

Previously, he was Professor of English and director of the Centre for the Study of Sexual Dissidence & Cultural Change (2006-2011) at the University of Sussex. Professor Spurlin has published numerous essays and books in queer studies and on the politics of gender and sexual dissidence, including Lost Intimacies: Rethinking Homosexuality under National Socialism (2009), Imperialism within the Margins: Queer Representation and the Politics of Culture in Southern Africa (2006), and Comparatively Queer: Interrogating Identities across Time and Cultures (2010; co-edited with J. Hayes and M.R. Higonnet).