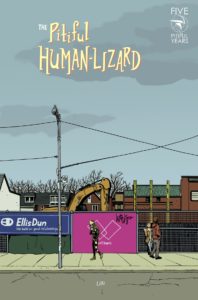 Introducing the Pitiful Human-Lizard : Birth of a Humble Toronto Superhero

Comic Creator Jason Loo discusses the creative process behind Toronto's new superhero, as well as its influences, the diverse characters, and Toronto as a character.

Jason Loo is a Toronto-based cartoonist and freelance illustrator. His latest work AFTERLIFT with writer Chip Zdarsky for Comixology Originals earned them an Eisner Award, as well as a nomination for a Harvey Award and a Joe Shuster Award. Jason is also the comic creator behind Toronto's own superhero the PITIFUL HUMAN-LIZARD. Created in 2014, the comic series follows a thirty-something office clerk who finds a more fulfilling purpose in his life as a (struggling) superhero.  His work on PHL got him nominated for a 2018 Doug Wright Spotlight Award. Other comic works by Jason include contributions to the TORONTO COMIC ANTHOLOGY (volume 3), KILL SHAKESPEARE (volume 5), and RAZORBLADES (issue 2).