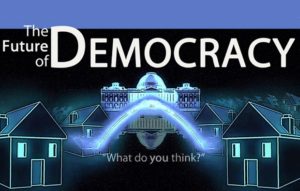 You are invited to our fourth and final McLaughlin College Union Debate for the academic year that will consider the timely and highly relevant topic, that has been the subject of much scholarly and popular discussion and commentary, on the future of democracy.

The term “democracy” has many definitions and can be highly contested, but it is commonly defined as “a system of government by the whole population or all the members of the state, typically through elected representatives.” (Oxford Languages, Google, accessed March 9, 2021) or as “a form of government in which people have the authority to choose their governing legislators.” (Democracy, Wikipedia, accessed March 9, 2021)

The future of democracy has preoccupied many academics and researchers over the last few years who have offered numerous scholarly journal articles and books, including: Ronald M. Glassman, The Future of Democracy (Springer, 2019); Steven Levitsky and Daniel Ziblatt, How Democracies Die (Broadway Books, 2018); Adam Przeworski, Crises of Democracy (Cambridge University Press, 2019), Jens David Ohlin, Election Interference: International Law and the Future of Democracy (Cambridge University Press, 2020), along with Government and Opposition, Suppl. 50th Anniversary Special Issue, “The Future of Democracy,” Vol. 50, Special Issue 3, July 2015; Miguel Goede, “The future of democracy: the end of democracy as we know it,” Kybernetes, Vol. 48, No. 10, 2019, pp. 2237-2265. The media has also focussed on this concern. The New Yorker, as an example, has a special series on “The Future of Democracy,” https://www.newyorker.com/news/the-future-of-democracy?verso=true, accessed March 9, 2021) and there is Thomas B. Edsall’s “Democracy is Weakening Right in Front of Us,” The New York Times, February 17, 2021 (https://www.nytimes.com/2021/02/17/opinion/digital-revolution-democracy-fake-news.html, accessed March 9, 2021), along with many other op eds in other newspapers.

The Democracy Index, issued by the Economist Intelligence Unit (EIU), in its annual survey rates the state of democracy across 167 countries and last year found that democracy has eroded around the world. Only 23 countries were found to be “full democracies” by the EIU. There were 57 countries listed as having authoritarian regimes. Canada is identified as a “full democracy” while the US is listed as a “flawed democracy.” (The Economist, Intelligence Unit, Democracy Index 2020, p. 43). According to The Economist, the state of the world’s democracies appears to be in decline.

All of this leads us to conclude that the future of democracy is a most worthy topic for our McLaughlin College Union Debate on the following resolution,

"Democracy is resilient and will survive, despite the challenges it faces, well into the foreseeable future.”

We have an outstanding international panel of experts to debate this proposition and invite you to join us for what should prove to be a most interesting and engaging debate on a subject of great importance.