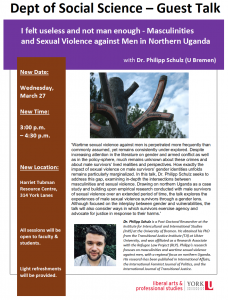 Abstract:  'Wartime sexual violence against men is perpetrated more frequently than commonly assumed, yet remains consistently under-explored. Despite increasing attention in the literature on gender and armed conflict as well as in the policy-sphere, much remains unknown about these crimes and about male survivors’ lived realities and perspectives. How exactly the impact of sexual violence on male survivors’ gender identities unfolds remains particularly marginalized. In this talk, Dr. Philipp Schulz seeks to address this gap, examining in-depth the intersections between masculinities and sexual violence. Drawing on northern Uganda as a case study and building upon empirical research conducted with male survivors of sexual violence over an extended period of time, the talk explores the experiences of male sexual violence survivors through a gender lens. Although focused on the interplay between gender and vulnerabilities, the talk will also consider ways in which survivors exercise agency and advocate for justice in response to their harms.'

Researcher Bio: Philipp Schulz is a Post-Doctoral Researcher at the Institute for Intercultural and International Studies (InIIS) at the University of Bremen. He obtained his PhD from the Transitional Justice Institute (TJI) at Ulster University and was affiliated as a Research Associate with the Refugee Law Project (RLP). Philipp's research focuses on masculinities and wartime sexual violence against men, with a regional focus on northern Uganda. His research has been published in International Affairs, the International Feminist Journal of Politics, and the International Journal of Transitional Justice.